Welcome to the online home of the Rural Burlington Greenbelt Coalition.  Our mission is to protect the Greenbelt Plan’s ‘protected countryside’ in north Burlington from ecologically and socially damaging development 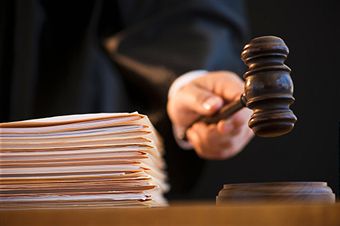 June 30th, 2016 – The City has won its third court victory in three years.  Justice Gibson finds that “the Airpark has indeed been conducting a commercial landfill business on airport land…” and orders it to file a Site Alteration Application with the City by August 31st, 2016.

APPEAL UPDATE:   The Burlington Airpark’s appeal of the City of Burlington’s 2016 court win and and $118,000 cost award will be heard at the Ontario Court of Appeal on Tuesday March 28th 2017 at Osgoode Hall, 130 Queen St. West in Toronto.  Community members are urged to attend!
For further information on this important and ongoing legal battle over the City’s right to enforce it’s Site Alteration Bylaw on Airpark property after a 5 year, unregulated fill operation, please refer to the City of Burlington’s Airpark information page:
http://www.burlington.ca/…/your-city/Burlington-Executive-A… 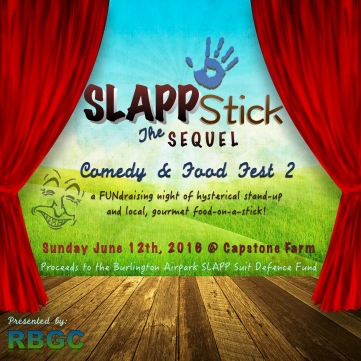 Thank you to everyone who attended SLAPPstick the Sequel!  It was a successful event, both in fun and funds raised, and we are very grateful once again for all the community support.

If you missed the event, you can still donate to our legal defense fund through our extended FundRazr campaign or by visiting our donation page.

The Ontario Government has passed Bill 52; the Protection of Public Participation Act is now law, but it will not be retroactive.

Monte Dennis and Vanessa Warren have been left behind by Anti-SLAPP legislation and must continue to fundraise for their legal defense.

A SLAPP Suit (Strategic Litigation Against Public Participation) is a meritless legal action brought to intimidate opponents, deplete their resources, reduce their ability to participate in public affairs, and deter others from participating in discussion on matters of public interest.

In this case, the Burlington Airpark has made a large Claim against a local blogger, a local advocate, and a candidate for Municipal Council.  The intent is to try and quell local reporting, advocacy and perhaps most concerning — public dialogue — during the democratic process of municipal elections.

Please support the costly legal defence in this important case, and contact your MPP to request a re-introduction of anti-SLAPP legislation.

The Burlington Airpark – A Rough History

The Burlington Airpark is located in the protected countryside of Ontario’s Greenbelt just east of the Niagara Escarpment, at the base of Mount Nemo. Century farms, rural residences, protected watercourses and land rich in agricultural heritage surround it.

In July 2007, Mr. Vince Rossi purchased the Burlington Airpark from the Kovachik family who had founded and operated it since 1962. In its 45 year history, the Airpark had been quiet and primarily recreational, and much of the property was leased to local farmers who continued to farm the pristine land to the west of the main runway and around a regionally significant woodlot.

Almost immediately after its purchase, the new Airpark owner sought a municipal variance in order to store approximately 8000 auto-auction cars on airpark property. Neighbours fought the parking lot application and won but were forced to organize again in November 2008 when the new owner proposed a 65m high cell-phone tower next to residences on Appleby Line. The community’s advocacy efforts prevailed again and the cell phone tower application was withdrawn.

In September 2008, the new owner began accepting fill at the Burlington Airpark.

By February 2009, approximately 50,000 cubic meters of fill had been imported and dumped on the farmland, and the regionally significant woodlot had been destroyed.  Neighbours began to see negative effects on their properties from improper storm water management, runoff and siltation; but this was only the beginning.

The City of Burlington, Region of Halton, and even the Province of Ontario were all advised that they had no authority on Airpark property due to the Jurisdictional Immunity provided by the Federal Aeronautics Act. As a result, the fill operation continued unregulated and unabated for five more years.

In February 2013, the Airpark owner sought another variance, this time to purchase additional prime agricultural land, designated Greenbelt Protected Countryside, and to extend the Airpark’s main runway to 4700 ft. — 700 feet longer than runways found at Buttonville or Toronto Island Airports.

It was during this variance process that the landfill situation became apparent to the environmental advocacy community in rural north Burlington, and the Rural Burlington Greenbelt Coalition (RBGC) was born.

By July of 2013, conservative estimates put the amount of fill dumped on Airpark property at 500,000 cubic meters (the equivalent of 200 olympic sized swimming pools) and an environmental review of the few soil reports that were available found petroleum hydrocarbons, heavy metals and carcinogens like benzopyrene in concentrations high enough to refer to the Airpark as “an unlicensed waste disposal facility on the basis that it has accepted contaminated soil”[1]. The reports from this review also noted that there was no assurance that this data represented the worst-case soils placed at the site.

The Airpark owner continued to refuse to cooperate with any level of government to permit testing of the soil that had been dumped. Further, by 2013, adjacent homes and farmlands had been devastated by the flooding and siltation caused by the now enormous differences in grade at their property lines (up to 3 stories high in some cases) and a complete lack of stormwater management.

The Airpark fought these charges, claiming the City and other agencies had no jurisdiction or authority to enforce the law. In his decision Justice Murray of the Ontario Superior Court said:

There is little doubt that the runway construction must comply with the federal specifications relating to slopes, surfaces of runways, runway shoulders and the slopes and strength or runway shoulders. However, requiring Airpark to use clean fill regulated by the municipality for the benefit of other residents in the municipality will not be permanently reflected in the structure of the finished product in the sense meant by Justice Beetz. The by-law is not an attempt by the municipality to regulate slopes or surfaces of runways, runway shoulders or the slopes and strength of runway shoulders. While regulating the quality of fill may have an impact on the manner of carrying out a decision to build airport facilities in accordance with federal specifications, such regulations will not have any direct effect upon the operational qualities or suitability of the finished product which will be used for purposes of aeronautics.[1]

On June 11th, 2014 the Ontario Court of Appeal upheld Justice Murray’s decision and ruled that the City of Burlington’s fill by-law did NOT intrude on the core of the Aeronautics act, and therefore DID apply on Airpark property. This ruling also gives Provincial environmental enforcement the green light to commence tesing on the affected land.

THIS IS NOT THE END OF THE STORY, HOWEVER

In May of 2014, the Burlington Airpark filed a $100,000 claim for libel against Pepper Parr, Vanessa Warren, and Monte Dennis, seeking damages for comments made in relation to the Airpark’s fill operation.

Pepper Parr publishes the Burlington Gazette, an online newspaper. Vanessa Warren is the former Chair of the RBGC and is currently a candidate for Municipal and Regional Council. Monte Dennis is the current Co-Chair of the RBGC and member of COPE and CONE. Pepper Parr had reported diligently on issues surrounding the Airpark, and Vanessa Warren and Monte Dennis had been very vocal environmental and social advocates in the fight against what we believe is an illegal landfill in Greenbelt Protected Countryside.

SLAPP suits are meritless legal actions brought to intimidate opponents, deplete their resources, reduce their ability to participate in public affairs, and deter others from participating in discussion on matters of public interest. In this case, the intent is to try and quell local reporting, advocacy and perhaps most concerning — public dialogue — during the democratic process of municipal elections.

On June 30th, Burlington City Council will vote on a Resolution requesting that the new Provincial Government act quickly to pass anti-SLAPP legislation.

Bill 83, “An Act to amend the Courts of Justice Act, the Libel and Slander Act and the Statutory Powers Procedure Act in order to protect public expression on matters of public interest” was introduced into the Provincial Legislature in June 2013 and received unanimous support from all political parties before it died on the order paper when the election was called.

Anti-SLAPP legislation provides speedy redress for civil claims against people engaging in legitimate speech and public participation. It allows for early review and speedy processes to resolve SLAPP suits; reverses the onus so the initiator the suit must prove that inhibiting public participation is not the reason for the lawsuit; provides strong and effective disincentives – financial and otherwise – to dissuade potential SLAPP plaintiffs from initiating meritless claims; and suspends governmental spending and approval processes until alleged SLAPP suits are resolved (perhaps the strongest disincentive for property developers).

The RBGC Seeks endorsement for the following: